Even if you aren’t going to be doing any statistical analysis yourself, being able to interpret and critically evaluate published statistics will enable you to get the most out of the journal articles and other literature you read. This page details some commonly reported statistics and how to interpret them (although note that if you are looking to gain a more fundamental understanding of of how to interpret a few common graphs and tables and calculate a few key values, you may find that the statistics section of the Statistics and probability page of the Numeracy fundamentals module is more suitable instead).

Descriptive statistics are used to summarise and describe the data you have access to, be it: 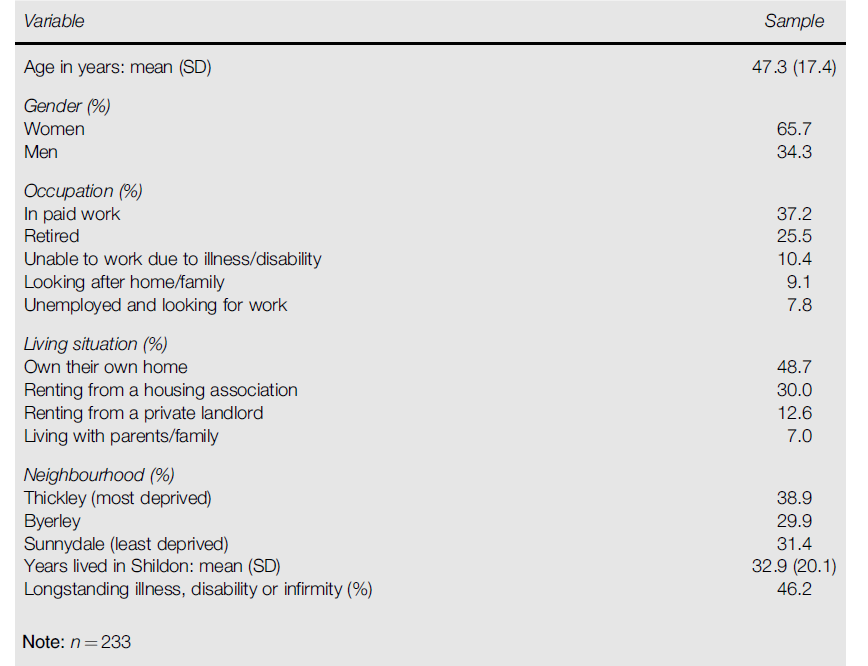 
This data was obtained from a sample of people who live in a particular city, and the sample size is \(233\) (as indicated by the \(n = 233\) at the bottom of the table). Moreover, there are two different types of variables summarised in this table:

These two types of variables need to, and have been, analysed differently.

Let's look at continuous variables first (alternatively, if you would like more information on the different types of variables please refer to the Data and variable types page of this module).

It is important to note that the mean and standard deviation are not the only measures of central tendency and dispersion respectively though, and that they are not suitable for use in all situations. In particular when the data set is skewed (not normally distributed; more on this later) or has outliers (a value or values that are well above or below the majority of the data) the mean and standard deviation do not accurately describe the data. For example, suppose that the vast majority of residents described in Table 1 are aged between \(40\) and \(45\), but that there is a very small group of residents aged in their \(80\)s. The latter ages would be outliers, and would cause the mean to increase above what would otherwise be the central value. In such instances the median is a more appropriate measure of central tendency (as it is not affected by outliers or skew), and the interquartile range is the accompanying measure of dispersion. So if a variable is skewed or has outliers a good piece of research will make use of the median and interquartile range as the summary measures instead.

Categorical variables, on the other hand, cannot be summarised using measures of central tendency or dispersion as the data is not numerical. Instead percentages (and often also frequencies) are used to show what percentage of the sample is in each category (or how many are in each category in the case of frequencies). For example the descriptive statistics for the 'Gender' variable show that \(65.7\%\) of the sample described in Table 1 are women, while \(34.3\%\) are men.

In particular, researchers are usually interested in whether continuous variables conform to a normal distribution or not. This is a special kind of distribution that large amounts of naturally occurring continuous data often approximates, and which has two key properties; that the mean, median and mode are all equal, and that fixed proportions of the data lie within certain standard deviations of the mean (\(68\%\) within one SD, \(95\%\) within two SDs and \(99.7\%\) within three SDs). Journal articles do not always mention testing to see whether variables are normality distributed or not. When they do, they usually refer to the Shapiro-Wilk test (one of a series of tests used for checking normality). If an article states that variables pass this test (or more specifically, that the \(p\) value for this hypothesis test is above \(.05\)) it means that normality can be assumed. For example, Power et al. (2019) reference this when they state that the “outcomes were assessed for normality using Shapiro-Wilk” (p. 5). Other times an article might state that variables have been transformed (with a natural logarithm for example), which means that while the variables were not originally normally distributed, they have had a mathematical function applied to them which has made them so (if you would like more information on the properties of the normal distribution, and how to assess whether a variable is normally distributed, please refer to The normal distribution page of this module).

For each of these tests, a good article should include statistics that show whether any differences or relationships between variables can be considered statistically and/or practically significant in terms of the population. These terms, the relevant statistics, and how to interpret them are explained below. Alternatively, for more information on inferential statistics, including how to calculate measures of statistical and practical significance, and details of some of the tests mentioned above, please refer to the Inferential statistics page of this module.

Statistical significance refers to the likelihood that what has been observed in the sample (for example a difference in means or a relationship between variables) could have occurred due to random chance alone. In particular, if it is very unlikely that it could have been due to chance alone then it is considered statistically significant in the population. What do we mean by ‘very unlikely’ though? This is where the \(p\) value comes in!

As an example of both \(p\) values and confidence intervals consider Table 2, which displays descriptive statistics together with \(p\) values and confidence intervals for a series of variables. The latter two statistics enable us to determine if there is a statistically significant difference in means between the two groups (adolescents with and without cerebral palsy) for each of the variables.

Table 2
Descriptive statistics, \(95\%\) CIs and \(p\) values for a study investigating mental and physical health of adults with cerebral palsy

Practical significance refers to whether something observed in a sample (for example a difference in means or a relationship between variables) is meaningful in a practical sense or not. It is determined by calculating an effect size, which is different for different tests. For example:

Articles that report on practical significance provide an important additional perspective to those that only report on statistical significance, as the latter alone does not allow the reader to have an appreciation of whether the findings are important in a real-life sense or not. In particular, the fact that statistical significance is influenced by sample size means that in very large samples, very small differences that are not actually meaningful in real life may be found to be statistically significant; and conversely in very small samples, very large differences that are meaningful in real life may not be found to be statistically significant. This relates to the statistical power of a test, which is the probability that an effect of a certain size will be found to be statistically significant. In particular, a calculation can be performed to determine how big a sample needs to be in order to observe an effect of a certain size at a certain level of significance for a given power (usually \(0.8\) or above), so articles may also refer to the power of a test.

Returning to measures of effect size, and as an example consider Table 3 which shows odds ratios in addition to \(95\%\) confidence intervals and \(p\) values. The latter two relate to the statistical significance of the association between each exposure variable and the outcome variable (L.longbeachae infection), while the odds ratios relate to the practical significance of the association.

For example, the first odds ratio of \(4.74\) indicates that those infected with L.longbeachae were \(4.74\) times more likely to have used potting mix in the last four weeks than those not infected. According to Cohen's conventions for interpreting effect size detailed here this indicates a medium to large effect, although note that this kind of interpretation is contextual and that interpreting practical significance is less concerned with comparing to cut-off values than statistical significance.

Furthermore, the first \(95\%\) confidence interval of \(1.65 - 13.55\) indicates that we are \(95\%\) confident that this sample comes from a population where those infected with L.longbeachae were somewhere between \(1.65\) and \(13.55\) times more likely to have used potting mix in the last four weeks than those not infected. As this confidence interval does not include the value of \(1\), which for an odds ratio means that the odds of exposure are the same for those with and without the outcome, the association between using potting mix in the last four weeks and L.longbeachae infection is statistically significant at the \(.05\) level of significance. This is also evidenced by the \(p\) value of \(.004\).

Note that articles will often include adjusted odds ratios in addition to, or in place of, the (crude) odds ratios seen above. These are simply odds ratios that have been adjusted to take into account any additional confounding variables (i.e. other variables that may be having an influence on the outcome variable), and can be interpreted in the same way.

If you would like to practise interpreting some of the other odds ratios in the table, have a go at the following questions:

These tables also include (amongst other statistics) an \(F\) value for each one-way ANOVA. This is the test statistic for this test (note that results of other tests will sometimes include the test value as well; a \(t\) value for a \(t\) test or Chi-square value for a Chi-square test, for example). This \(F\) value is the ratio of the variation between groups to the variation within each group. For example, an \(F\) value of \(0.818\) for the ‘Age’ variable indicates that the variation in school attachment scores between the four age groups is \(0.818\) times the variation in school attachment scores within each age group (i.e. the variation between the groups is actually less than the variation within the groups). The bigger than \(1\) the \(F\) value is, the greater the likelihood that there is a significant difference in the means between at least two of the groups - however note that it is the \(p\) value that needs to be interpreted in order to test this.

Use the information above to answer the following questions:

About Contact Site map
Curtin would like to pay respect to the Aboriginal and Torres Strait Islander members of our community by acknowledging the traditional owners of the land on which the Perth campus is located, the Whadjuk people of the Nyungar Nation; and on our Kalgoorlie campus, the Wongutha people of the North-Eastern Goldfields.

© Curtin University Library, 2021. Except for images or where otherwise noted, UniSkills content is licensed under a Creative Commons Attribution ShareAlike 4.0 International Licence.